The Player Pathway, formerly the Single System was launched in October 2016.

The Player Pathway provides an environment that helps all junior players realise their potential, whether that means they are the best club player that they can be, seek a lifelong commitment to the game through coaching, or volunteering, or perhaps go on to represent England or Great Britain at junior or senior level.

The Player Pathway is made up of the following tiers:

Academy Centres – delivered in 49 counties, provide a high quality talent programme for identified players in U14 – U17 age groups

Performance Centres – are based across the country providing frequent, high quality training with the best coaches for U15 and U17 players

National Age Group Squads (NAGS) – are selected at U16 and U18 age groups for girls and boys. NAGS provides the first taste of international competition for our young players 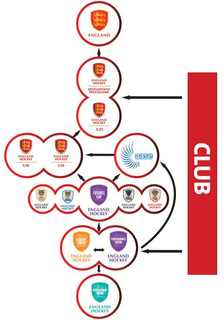 The Player Pathway is the development pathway for players, coaches and officials of all ages and abilities to reach their full potential.  It is based on Long Term Athlete Development (LTAD) principles that put the participant at the centre of all decisions, with extensive scientific research that has been widely accepted by the majority of other major sports within England.

Why does hockey have a Player Pathway?
The purpose of the Player Pathway is to make opportunities for participants fair, equitable and consistent.  It is to ensure that a suitable level of coaching and competition is offered for people at the appropriate stage of their development and to maximise the chance they have of fulfilling their potential whether that potential is as a club or International player, coach or official.

How can I access the Player Pathway?
The Player Pathway can be accessed by playing at school, a local club or attending one of the local Development Centres. The first time a player accesses the player pathway they must enter at DC level.

England Hockey have received requests to consider an amendment to the current age banding protocols which exist in the Player Pathway. Players are currently banded based on their year of birth (1 January - 31 December) with the request to adapt age banding, linking instead to school age (1 September - 31 August).

England Hockey has considered, in consultation with the Player Pathway Committee, whether to revert to the 1 September age band for County (Sub Area) hockey.

Therefore, from 1 September 2021 the following age bands will come into place in County (Sub Area) Hockey.

Please complete the short form to register as a player, coach, young umpire/official, School and Club to be kept up to date with all the developments in the county.

Details of Data Controller are